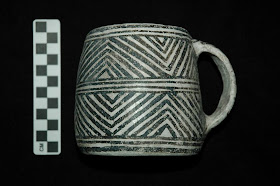 The vessel dates back to the Pueblo III period, an era from about 1150 to 1300 CE when ancestral puebloans began to establish big, sophisticated multi-family communities. This was when Mesa Verde was built, for example, and when Pueblo populations peaked in southwestern Colorado and southeastern Utah, before people moved south to settle what's now Arizona and New Mexico.

Those who know their artifacts can tell all that just by looking at this mug: Its pattern of repeating triangles and horizontal lines are known as Mesa Verde Black-on-White, a style preferred around Sand Canyon in the 13th century.

Mugs like this have been found at Sand Canyon somewhat more than at other places in the ancestral pueblo realm, but they seem to have been used for both ceremonial and domestic, day-to-day purposes.

But not for coffee.